There’s a lot to love about kitesurfing – the waves, the wind, the experience of being on the water, either doing a bunch of intense, airborne tricks or just drifting along the waves. It is an extremely fun, and sometimes even relaxing, non-traditional marine sport that has been popular for decades.

Many people are discouraged from learning to kitesurf because they think that it would be too difficult to learn. So is kitesurfing hard? Here we’re going to provide you with all the facts and details, and also debunk some common myths that stop people from starting kitesurfing.

Kitesurfing – What Is It?

Kitesurfing is a wind-powered water sport that makes use of a board and a kite to move across the water, usually in the ocean. Kitesurfing makes use of wind power using a large, parachute-like kite as the means for propelling the surfer over the water on a small kiteboard or surfboard, similar in shape to a wakeboard.

Even though surfing is in the name, you don’t actually need the waves to be able to kitesurf successfully. Instead of using the power of the waves, kitesurfing uses the wind to move the surfer along. Flatwater locations are usually preferred by kitesurfers that prefer to freestyle and do a lot of tricks since the water is easier to land on and take off from.

Kitesurfing is one of the few sports that does not become repetitive or boring because there are so many conditions to surf in. The kites, which have inflatable tubes, are used to pull the surfer across the water, and the inflatable parts of the kites help it keep its shape and also float in the water if it were to drop down.

There are a number of different kite sizes that surfers use, which depend on the wind, as well as the size and strength of the rider using them. They generally range anywhere between 2m squared to 14m squared.

There have been extreme changes to the design of kites used for kitesurfing since 2006, and before then, there was only one kind of kite, which was called the C-kite. The names come from their shape, and after 2006, there were many more kites introduced to the market.

Kitesurfing schools tend to make the activity sound easier than it really is. Some people will tell you that learning to kitesurf only takes a few days, while others will say that the learning process is pretty difficult.

Even though it is possible to learn kitesurfing in a few days or one or two weeks, it does have quite a steep learning curve. You are going to have to work to get two interacting and different skills – board riding and kite flying. Both activities involve intense coordination and the ability to balance.

The first obstacle to overcome when learning to kitesurf is the wind. You might think that the faster the wind, the more difficult it is going to be to kitesurf, but the antithesis thereof is actually true. Slower winds, under 12 knots, for instance, will make learning how to kitesurf much more difficult for you.

There are a lot of technicalities involved in flying a kite in light winds, even if you have a larger kite. If you’re training with light winds in the beginning, you’re going to continually drop your kite due to the beginner mistakes you are bound to make.

The water is the second obstacle that you need to overcome and applied to the second section of your learning process. You are probably going to learn how to pilot while you’re on the beach, and waves, currents, and chops are just going to get in your way while you’re trying to learn.

Your last obstacle is your equipment. If your kite is too small for the speed of the wind you’re surfing in, you are going to constantly crash it, in a similar manner to trying to kitesurf in slow winds. On the flip side, if your kite is too large, the wind is going to overpower you, which sometimes gets dangerous. Try to talk to a professional kitesurfer about which kite size is right for you.

If you can manage to get past these obstacles, then you’re going to learn how to kitesurf in no time. The process is lengthy, and you need to be patient, but the payoff is so worth it.

Many people make the decision not to kitesurf because they’ve heard some myth or rumor that puts them off. We’re going to rapid-fire debunk some of the most common kitesurfing myths and hopefully encourage you to take up the sport.

As we’ve already said before, kites and boards come in a variety of different sizes. If you are a small kitesurfer, you will be riding a kite that is smaller than one the average surfer will ride. If you are larger, then you’ll be riding a larger kite.

If you’re taking the necessary precautions and are surfing safely, then kitesurfing is not a very dangerous sport at all. Everything you do in life has some form of risk, and kitesurfing is no different, but if you don’t know what you’re doing, then things can go very bad.

If only this were true. Over the years, things are getting better, and people three years ago would take weeks to learn what people nowadays can learn in a matter of days. Even though this is possible, you should not expect to be able to ride your first time or even your second time. 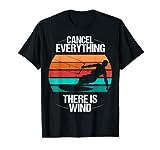